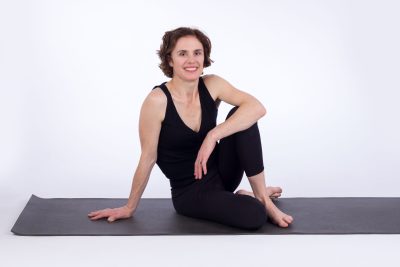 Helen (raised in New Zealand) began practising Iyengar Yoga while studying music in Detmold in the early 1990’s. Drawn to yoga to help cope with physical problems caused by a strong scoliosis, drawn by her interest in Indian Philosophy, as well as wanting to enhance her music performance, yoga quickly became an important part of her life.

She undertook the Iyengar teacher Training in Amsterdam 2000 – 2003, and has been continuously teaching yoga now for 18 years. Her teaching imparts the emphasis on alignment and balance which is so integral to good posture, and to Iyengar Yoga. She offers regular workshops on Yoga for Scoliosis, and wants to show by her example how it is possible to live with this condition, to maintain freedom of movement, freedom from pain, and freedom from the fear of being limited in life.

Helen has travelled to Pune to study at the Ramamani Iyengar Memorial Yoga Institute, regularly attends Workshops taught by senior Iyengar teachers, and each year since 2016 hosts a workshop in Berlin for Yoga and Scoliosis with Marcia Monroe from New York. She remains an active musician, as a teacher and performer, in demand in the Early music scene, performing as a baroque trumpet specialist.